This is old news by this point, I know. I tell ya, you go to lunch and big things happen. The Violence Against Women Reauthorization bill passed the House of Representatives today in the form passed by the Senate earlier this month. Yay! And given President Obama’s comments, I think we can safely say it will be law soon. I am very disappointed to see that Scott Perry voted against it. I guess he just needs to hear from me more often.

It’s VAW week here, it seems. I railed about the Oscar Pistorius trial last week and how it obscures the larger pictures of violence against women in South Africa. As of last night, it seems that the House is ready to (sneakily?) pass the Senate version of the Violence Against Women Reauthorization Act, replete with protection for LGBTQ individuals and college students, and a strengthened ability for trial courts to act within their own borders (call your congressperson). The CDC also released a special report of its violence and victimization data with a focus on gender and sexual orientation. This is huge because national level surveys often don’t provide large enough samples of LGBTQ individuals or victims of violence in general to extrapolate to national level statistics.

Last, but not least, the UNFPA released a pamphlet advertising its commitment to data-gathering on violence against women and girls and gender-based violence. In the era of big data, it’s perhaps hard to believe. But while we may be able to track all of the things you buy and the time you spend driving and how much time you spend on the internet at work instead of working, we know very little about gender-based violence all over the world. In my own field work, perhaps the biggest constraint I found is that there is not a good consensus on how to define violence. UNFPA agrees:

Why is it so hard for the humanitarian community to generate quality data and meet ethical and safety standards?
• Lack of standardization in GBV terminology, data collection tools and incident classification; also, lack of uniformity in how and what data is collected.

If I have to be a brat about it, I’d say what data are collected, but I think the spirit is right. Consensus on what is included in violence and better attention paid to the dangers and pitfall associated with measuring violence against women and girls should be a significant part of the work going forward.

I’m kind of new to this Pennsylvania resident thing. Despite having taught at Gettysburg for a year and a half now, I still pay a lot of attention to Colorado politics, to Venezuelan politics, even to North Carolina politics. However, I’m also a whiz at writing to my representatives in Congress and Senators, and I figure it’s time I do that a little more regularly with the people I voted for (or didn’t vote for) in November.

The Violence Against Women Act is a piece of legislation that’s very close to my heart, having studied it in depth as a graduate student and tried everything in my power to get an economics dissertation out of it. It didn’t fly, but you can bet Scott Perry‘s going to go get a few letters from me this week as the House version makes its way through committees. I thought I’d share his latest response to my letter urging him to pass VAWA in the form the Senate had passed it, which I was surprised to see was rather specific and didn’t commit to a position. 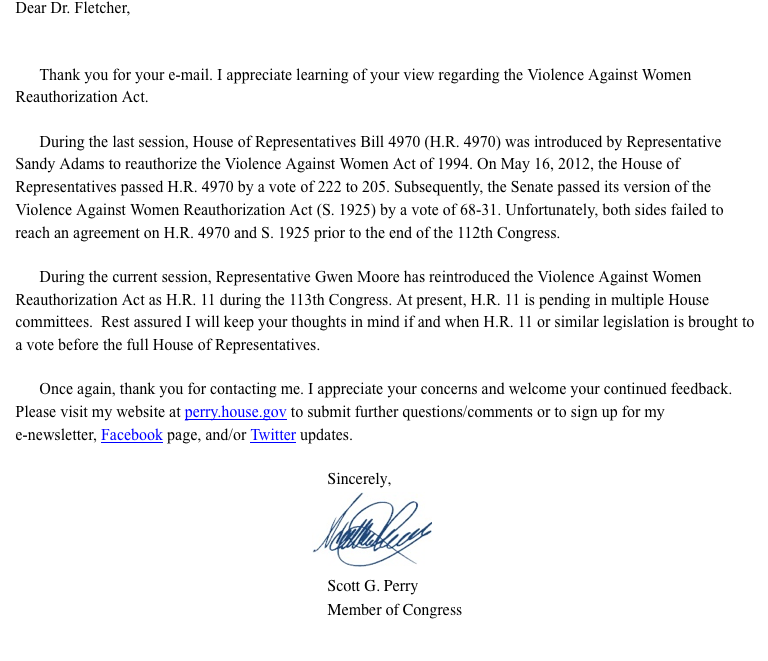 I’m used to getting replies from members of Congress that say something to the effect of, “thanks for your concern and taking time to write,” but this one outlined the VAWA saga for me. It’s just a form letter, I know, (though you can bet I made sure to put the Dr. part in there) but he’s new and he doesn’t seem to have committed to a side yet. Maybe there’s hope.

Update: As I was writing this, Roll Call published a piece saying that the House might actually vote on the Senate version as early as Thursday. Cautiously optimistic?

VAWA passed! 68-31. Notably, Kay Bailey Hutchison, who engineered a substitute with Chuck Grassley, voted for it, and all 31 Republican men voted against it.

If you haven’t read Mona Eltahawy’s essay in Foreign Policy: “Why do they hate us?“, you should. Then you should go watch Melissa Harris Perry moderate a discussion between Mona and another Egyptian feminist, Leila Ahmed. (Samhita has it on her latest post at Feministing.)

In other news, today was my last day of teaching this semester. Agreeing to attend a conference the last week of classes was not the smartest thing I’ve ever done, but all in all, I think I’m ready. I’ll be in San Francisco for the Population Association of America meetings (PAAs) from Wednesday to Monday, attending sessions, tweeting about demography and families, and eating a lot of good food. Apparently, events are already starting. I arrive Wednesday and will be going to the Economic Demography session on Wednesday afternoon and more. If you’re in town, my session is on Friday morning: 96. Stop by!

The Violence Against Women Act is up for renewal this year and is now on the Senate Floor. While we shouldn’t be surprised in this contentious political climate that bills that formerly renewed with broad bipartisan support are suddenly fodder for filibusters and other nonsense, this one is really important.

A colleague and I were discussing the bill last night. She contends that some groups put things into the bill that were unnecessary, particularly in an election year, and that’s hampering its forward progress. But the response by some lawmakers to limit the usefulness of VAWA would have overwhelmingly negative effects, by putting women and their families in more danger, increasing stigma, and reducing reporting.

Some of the problems outlined with the Grassley-Hutchison substitute are here, but in general, the substitute shows an extreme lack of understanding of the problems associated with violence against women, gender-based violence, and external effects of increased penalties, stricter reporting and cooperation requirements and more.