Today was Gettysburg’s graduation day, along with several other schools. President Obama spoke at Morehouse College and countless students threw their hats into the air at any number of institutions after deftly moving their tassels from right to left. With two siblings and three degrees of my own, I’ve seen my fair share of graduation ceremonies. There are plenty of similar elements, a commencement speaker encouraging graduates to go out and use their educations to change or save the world, a throwing of the caps, parading faculty, Harry Potter robes, Pomp and Circumstance (literally), and more, but each one also has the little bits that make it feel special.

This year, I’m leaving Gettysburg along with my students, so instead of just being a member of the faculty, it’s a little like I’m graduating, too, which makes it special. This class of graduating seniors also included some of my first students at Gettysburg, and by virtue of teaching an upper level required class three of my four semesters here, I had tortured 46 of the approximately 50 graduates leaving with an Economics major. They were my first students in Methods, my first students in Labor, and even a few wayward upper classmen who decided Principles of Micro was an easy way to round out their college career. Today was full of hugs and goodbyes and thanks and though I didn’t get to see everyone, I’m so glad I stayed for it. No one would have faulted me for bailing early, for getting home to Colorado, for leaving a place that no longer had a place for me, but it is days like today that I’m reminded of how important pomp and circumstance are, how important goodbyes are, how important are those markers of change to help guide us through the tumult and madness.

Teaching is often a field where feedback is in short supply, and some even call it thankless, but this weekend was one filled with joy and thanks. I talked to so many parents and brothers and sisters and cousins who told me thank you, who said they had heard so much about me, who wanted to make sure I knew that I had had an impact on their graduate’s life, on their learning, on their development. It was really wonderful to hear, and despite my excitement for summer in the mountains and Lafayette, it made leaving a little bit sweeter, and a little bit harder.

Each year I’ve taught, there have been a few students who have kept in touch, via facebook or continuos random run-ins at Boulder coffee shops, and I really hope that many of this year’s #gburg2013 grads continue to let me know how they’re doing. Congratulations, Gettysburgians!

Last week, when Eric Hanushek was at Gettysburg College for the Finance Symposium, we got into a post-symposium debate over a couple of glasses of wine concerning the usefulness of historians. In a place like Gettysburg, where most everyone is a historian of some stripe, this is a relevant argument. Gettysburg hosts the Civil War Institute and several scholars who study just that. Civil War buffs travel from all over the country–and perhaps even the world (are there non-American Civil War buffs?) to visit the battlefield and the town. They walk over Cemetery Ridge and Seminary Ridge and talk about Pickett’s Charge* and strategy and the people who died and go on ghost tours. Students and scholars read books and reimagine history, too. Hanushek argued that history is unlikely to change much because we already know all the facts and thus studying it, or at least writing several new books and papers on topics that had been exhausted, was perhaps not the best use of intelligent peoples’ time.

Last summer, I attended the Canadian Network of Economic Historians conference. It’s a great group of scholars who I’m sure would profoundly disagree with Eric’s argument, and they were particularly excited when I told them about my plans. “Gettysburg is going to have three economic historians!?” someone asked me. Actually, no. One retired, one is on leave–the one whom I’m replacing–and me, well, I don’t really consider myself an economic historian.

Despite that lack of self-identified association, I was ready to tell Eric he was wrong. I do have a few papers in economic history, using financial transaction and shareholding data from 18th century England. It’s really cool. Which is exactly what I told Eric. Perhaps I’m not going to entirely rewrite the History (with a capital H) of the establishment of the English stock market and modern portfolio theory, but I probably can make little changes to our understanding of how financial markets worked, how investors made decisions, and what effect that might have on commerce, trading, and the like.

In one of these papers, a coauthor and I show that despite relatively established secondary markets for trading shares of companies, individuals did not tend to buy in more than one company. Wealth constraints and the value of being able to vote likely trumped the relative ease with which one could stroll down to Garroway’s in Exchange Alley and pick up a few extra shares. In another, we show how women (who likely couldn’t stroll down to Exchange Alley for propriety reason) used the market.

Like I said, I’m not changing the history of the world, but it’s kind of cool to know that investors weren’t diversifying over these kinds of assets as we might expect modern investors to do. (Which, incidentally, they don’t always do, either).

I’ve been discussing some of these ideas with a few colleagues and all of a sudden, the ideas are flowing. Over lunch today, we mapped out at least half a dozen papers that could come out of these data. So now, my problem is this: how do I go on the market as a labor economist with a slew of papers that fall better under financial macro and economic history? I usually say that being a labor economist means I can do whatever I want, so there it is, I guess.

This blog is about economics, and I intend to keep it that way, but I wanted to express my joy for a minute at my students getting involved. Last night, Rick Santorum, former PA Senator and GOP candidate for the presidential nomination, chose to spend the evening in my little town of Gettysburg. He set up shop in the historic Gettysburg Hotel on the square (which is only kind of historic because the hotel, built in 1767, was totally rebuilt a few decades after the war and actually burned down in 1983).

I was promised bra burning and protestors, and though I had no desire to stand in line for hours (6:45 for a proposed 8pm start would have gotten you in for the actually 9:30 speech), I was curious to see who and what turned up. Sadly, there was no bra-burning, but there were several posters with bras attached.

Otherwise, the group was surprisingly diverse. I watched several Gettysburg College students file in, mingled with older locals and families from around the area. I’m told about 750 people actually made it into the ballroom. Outside, people from Occupy Harrisburg turned out. Ron Paul supporters (this is Gettysburg people, he did go to school here) were in full chant mode. The group of older women with burning bras and signs declaring “we fought this war 50 years ago” and “Women Beware” were among my favorites.

Most heartwarming, though, was the throng of students. On the protesting side, the Gettysburg Allies group came with rainbow flags and purple shirts and a circular piece of Styrofoam with the word Bayer on it. A group of female students changed “Keep your rosaries off my ovaries” and others joined in the OWS chanting. Inside, several students got in and told me today about how exciting it was. Regardless of what they thought of him, it was exciting for them to be there with the people and the cameras and the rush.

I was told, before I came here, that Gettysburg College students were pretty apathetic. It was great to see them excited and involved and participating. And seeing that their participation was part of something larger. It’s so important. Even I was really excited. I tweeted about it constantly, and it’s not like it was a big, significant event with people getting arrested or police brutality. It was mostly a bunch of students and locals, showing that they care, one way or the other.

And then they all went home and did their homework. 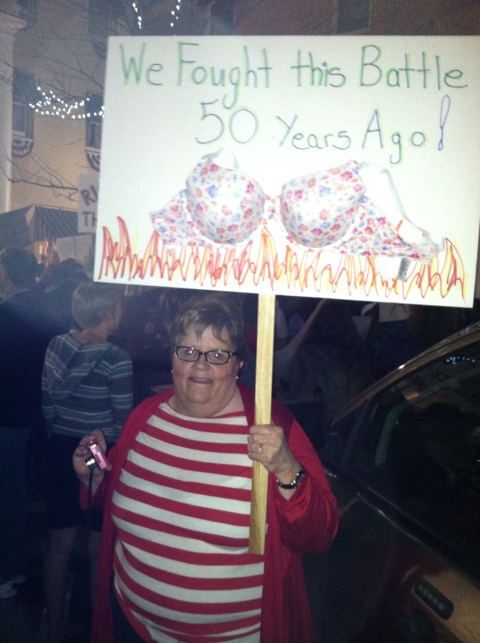